You arrive at your office early in the morning, and get hands on your business. OH! Your PC won't boot up at all. Rebooting it several times would yield no results!!  Most of the PC users might have experienced this. It's really awful to start a day like this...  Stay calm!

PCs have made our lives easier, but once if they run into problems it would be a very miserable situation as our entire work depends on these machines. It’s very hard to point out what's wrong with your PC, because almost anything can be responsible for a boot up failure. It's likely that a single component among many of them could be the culprit. Fixing or replacing that component should bring your PC to normal working. One of the primary issues concerned is your hard drive, wherein all your stuff including the OS will be saved. More than 40% of the PC users have encountered booting problems due to hard drive errors. This article lists top 3 reasons that would lead to PC booting problems, just read on. 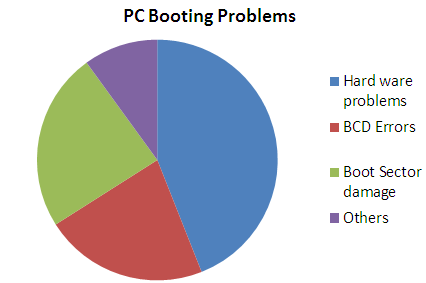 As and when your hard drives become older their efficiency decreases. They are likely to develop bad sectors due to improper handling of the hard drives. Also, presence of some of the minor errors on the hard drive could lead to major issues like MBR corruption in turn making your PC unbootable. Executing Chkdsk utility might serve as a quick fix in such cases even though it cannot solve the major issues like MBR corruption any minor system related errors could be fixed.

Boot Configuration Data (BCD) consists of all the vital information required for the successful booting process. In any case these BCD settings get corrupt; PC would run into unbootable state. Under such circumstances one would encounter several error messages as listed below:

The main cause for this is the Boot sector viruses that targets the bootloader and corrupts the booting chain. This in turn causes errors in the bootloader settings and a state that result in an infinite loop of Startup Repair. In addition, a failed Windows Update and missing of any system files are also accountable to leave the Boot Configuration Data (BCD) in an inconsistent or non-working state.

These are the top 3 factors that are responsible in accelerating the booting problems. However, you could find tons of other reasons like improper installation of drives, improper partitioning, too many startup programs, reduced hard drive space and many more. Nevertheless, these 3 causes are the most frequently encountered ones and needs immediate fix. Whatsoever might be the reasons, you can fix these issues sooner or later, but what about your data? Data will be either lost or inaccessible. No worries, you have a data recovery tool called Remo Recover software that could easily recover back your entire data on your PC that fails to boot.