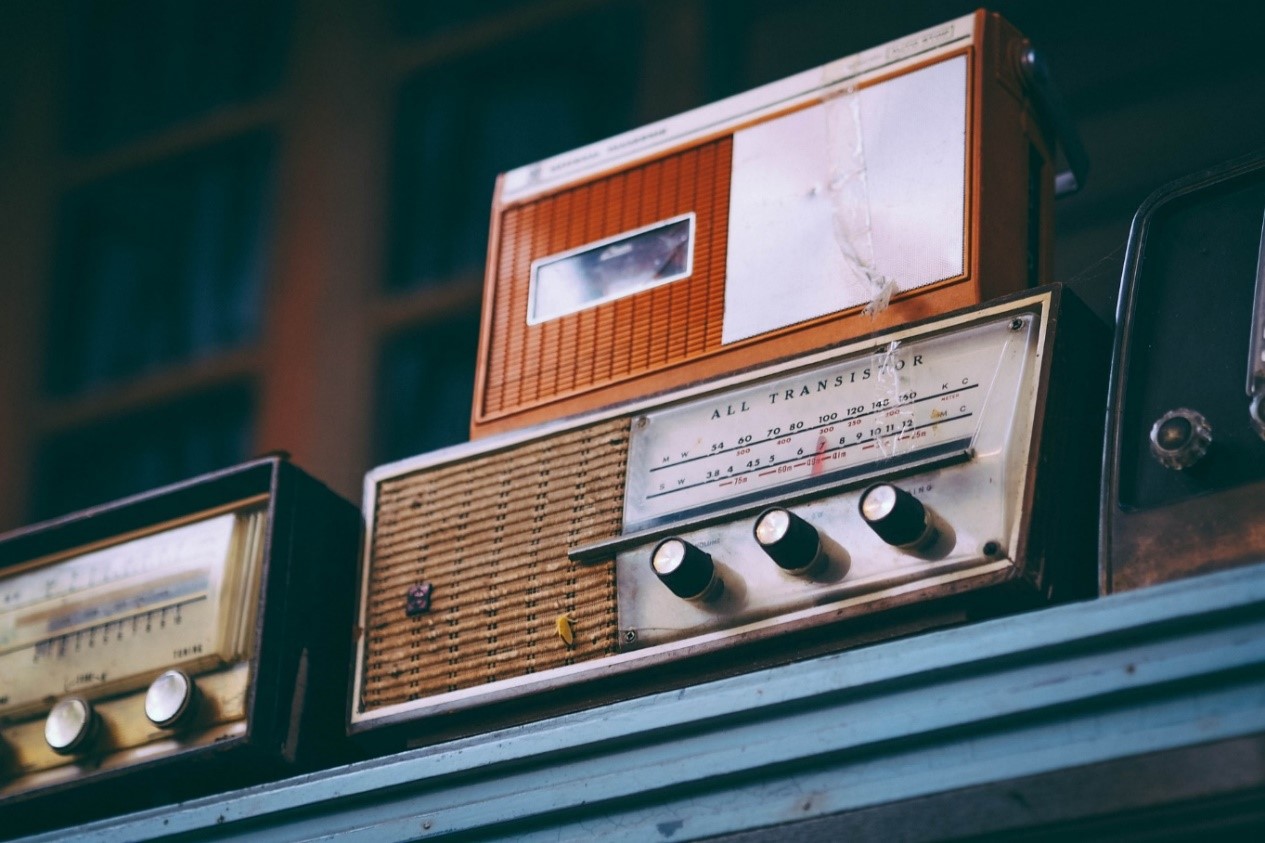 Sounds have always been a source of entertainment, but are they turning into nightmares. Let us see how sound waves inflict damage upon a user’s hard disk drive and turn out into a real nightmare...

Hard drives make an important part of our day to day lives, almost every technology has some use for hard drives. They hold most of our important data and have become a valuable asset for all of us. When these hard drives crash, taking away our data with it, things turn out to be worse. Reasons for a hard drive crash vary from malware attacks to a range of other problems such as hardware malfunction, software issues etc. But can huge sound be added into these reasons for hard drive failure?

Yes. Both sonic and ultrasonic sound waves of high frequencies can inflict harm upon your system and may result in your hard drive turning defective or forming bad sectors. There are several incidents which prove to us that hard disk drives can be damaged due to high-frequency sound waves. Let’s look at one of those incidents.

Last year ING Bank's main data center in Bucharest, Romania, was severely damaged during a fire extinguishing test. Further investigation had found that it was the loud sounds of inert gas being released that destroyed dozens of hard disk drives. The bank’s website is currently offline and the bank relies solely on its backup data center. Was it just the sound that had destroyed the drives, if so how? How does sound affect a hard drive’s functionality? It will be discussed in the further of the article.

HOW HIGH-FREQUENCY SOUNDS CAN BE A NIGHTMARE

Researchers from universities of Michigan and Zhejiang in China have found out that using Sonic or Ultrasonic waves of different frequencies can cause damage to the read, write and storage functions of a hard disk drive.

They prove that any device capable of emitting the soundwaves, such as speakers, can target a system’s HDD and cause it to crash. Thus, a malicious person can trigger an HDD attack with some inexpensive speakers or via a system’s speakers. Hackers also make a victim to visit a malicious website or send him phishing emails and upon clicking the malicious link, a damaging ultrasonic tone plays via the user’s system speakers which causes the hard disk to crash.

“It turns out that because of the microscopic tolerances inside the modern spinning hard drive, loud noises can stop them operating and even cause permanent failure. This is probably due to internal components vibrating.” Says Brendan Gregg, an Australian computer engineer working for Sun.

These audible waves vibrate the read/write head of the Hard disk and the ultrasonic waves alter the output of the HDD’s shock sensor. These vibrations cause damage upon the disk and the data contained, so the data stored in these locations cannot be accessed. Both of these errors can lead to problems with the operating system or application problems, including continuous corruption and system reboots. 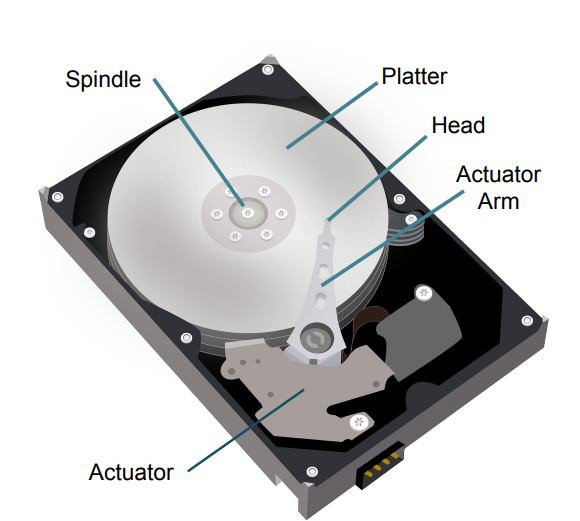 Researchers conducted tests using a Toshiba HDD exposed to ultrasonic signals, and they were able to crash the HDD’s read/write head. This could make the drive unreliable in its reads and writes, leading to bad sectors.

The basic principle behind this attack is that sound waves introduce mechanical vibrations into an HDD's data-storage platters. If the sound is played at a specific frequency, it creates a resonance effect that amplifies the vibration effect. And this results in damage on the platter.

Sound waves of high frequencies can cause permanent data loss, program crashes and unrecoverable physical loss in HDDs by creating bad sectors. Once bad sectors are formed on a hard disk, the data stored in those sectors cannot be read and may appear corrupt and inaccessible to the user.

Because hard drives store vast amounts of information inside small areas of each platter, they are programmed to stop all read/write operations during the time a platter vibrates so to avoid scratching storage disks and permanently damaging an HDD.

These attacks can be delivered in multiple ways. The closer the speaker is to the hard drive the less time is needed to carry out the attack. The longer the attack lasts, the more chances are that it will cause a permanent denial of service(DoS) that requires a device restart, instead of a temporary issue from which the device can recover by itself.

It is found that these sound waves can even inflict damage upon CCTV cameras and ATM’s also damaging their hard disks. In order for the attack to remain unnoticed and its nature unknown, the signal should be below the human hearing range (20 to 20,000 Hz).

These DoS attacks triggered by sound waves have different effects on various operating systems, it is provided in the table below. 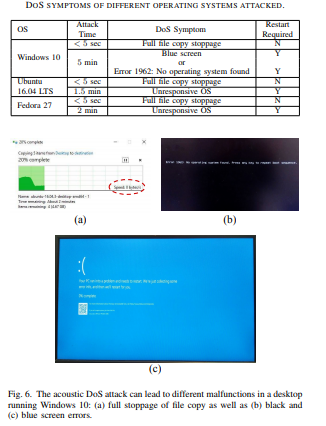 The above graph provides various symptoms including blue screens and OS errors. All of these can do the preferable amount of damage to your system’s hard disk.

Moreover, for the acoustic attacks to have an effect on your hard disk, they have to be in certain frequencies and the speakers must be in the direction of the device. The Frequencies required for four different hard drive models are provided in the table below. 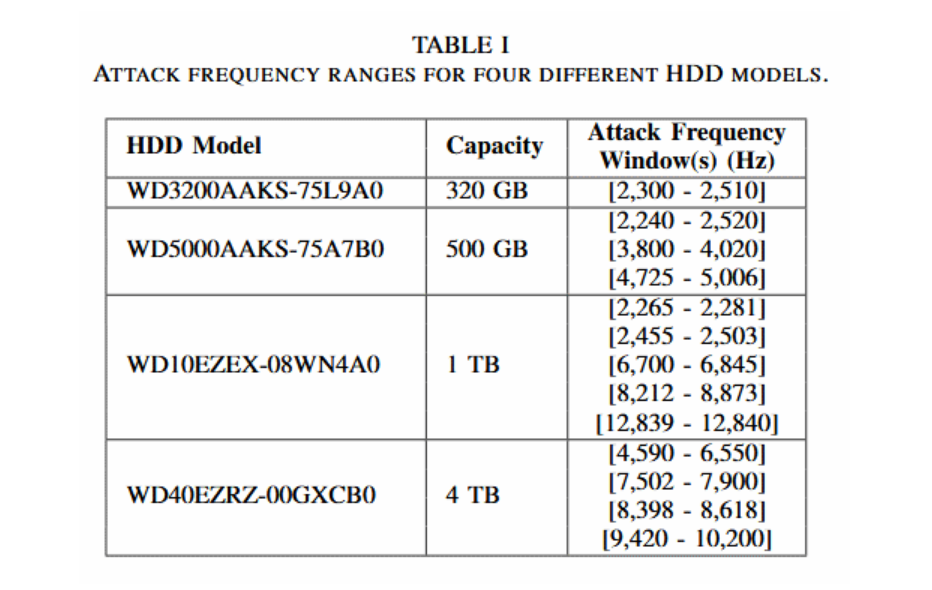 RECOVERING FROM THE ATTACK

Earlier in this article, we have discussed how these attacks can harm or damage your hard disk drive. Continuous file corruption, system reboots, and blue screens can also affect your hard drive negatively. After acoustic attacks, users may experience permanent data loss, program crashes and bad sectors in their hard disks. Many of the data stay corrupted and inaccessible. In some cases, the hard drive turns out to be damaged or unrecognizable.

So, what happens to your important data on the hard disk after an acoustic attack, is it lost forever? Not if you have a recent data backup. And you don’t need to panic even if you don’t have a backup as there is much reliable data recovery software nowadays that helps to retrieve your lost data.

Using the drive recovery option in REMO Recover, you can select the missing drive having bad sectors. And then choose a new location to save your recovered data. The tool also provides a preview option for the user to preview his files before recovery.