First, let me say congrats to Tim Cook for the completion of half a decade at the helm of Apple.

Mac OS X Panther (version 10.3) was the first OS X version that featured a full-fledged Disk Utility program. Before this OS, the functionality of this program was spread across two programs – Disk Copy and Disk Utility. In OS X El Capitan, Apple presents Disk Utility with a completely new look – you’ll definitely feel it if you have used the application before. The interface is cleaner and less clumsy.

Search Disk Utility in your El Capitan machine. You’ll get this programs under utilities. Open it and review the changes. The view will not be too different from “About this Mac” option in El Capitan. There’ll be a color-coded bar indicating the storage that has been used by different types of files as shown below.

And the while colored section denotes unused space.

No more Permissions on Disk Utility

It’s true; Verify and Repair Permissions are emitted from Disk Utility in El Capitan. For a fairly long period, these permissions were one among the favorite methods for OS X users to troubleshoot if something went wrong with their disks. Apple says, it’s because of the new System Integrity Protection (SIP), prevents file permissions to be modified, thus eliminating the need to repair permissions. 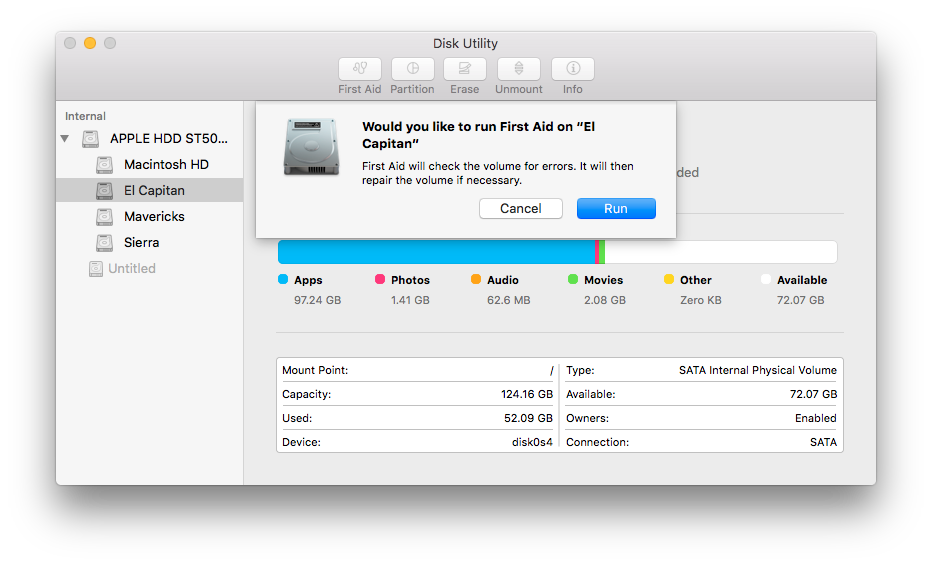 In the Disk Utility in El Captian, Apple provides you a 7-pass method to erase a volume. According to Apple, this method is one of the most secure erasing methods that’s useful for almost every user. But, you’ve to select a volume rather than a physical disk to use erase option in El Capitan. And, you must’ve to format the volume for securely erasing any file in it.

Sometimes formatting can end up with tragic losses such as loss of entire volume or some important files. Here's solution for Partition recovery after format.

In the Disk Utility in El Capitan, you can see a circle of pie slices to represent the storage allocation. You can drag around the slices in this circle, to create new partitions or to modify the existing ones.

Don’t think like, the discontinued features in El Capitan’s Disk Utility as gone from Mac forever. Most of these features are still accessible through the command line. Of course, you can try these commands – if you’re confident as a Master OS X user.