Don’t Wait For Windows 10 Anniversary update, Get it now Manually

With Windows 10 version 1607, also known as Anniversary update, Microsoft brings some exciting features to its users. This is the only 2nd major update in Windows 10 category and Microsoft has put it all. From significant changes in Start Menu, Cortana, Windows Ink's pen support & more, you'll get a lot.

Here’s a brief on some of the new features:

Cortana – Personal Digital Assistant, can be accessed without unlocking your system or device to play music or ask questions.

Xbox – You can enjoy gaming across devices with new features for Xbox app and Xbox One on Windows 10.

Customize Start Menu – You can resize Start menu by dragging it from its corners. Apart from that you can remove a tile from Start menu and resize a live tile as well.

Sync Devices – You can sync your PC to your mobile and other devices to get calendar reminders, notifications etc.

So, if you’re fascinated by new Windows 10, here’s a guide to get it:

Anniversary update is not immediately available for all users. You may have to wait for few days or even for weeks. As 350 million devices are running on Windows 10, this is a huge update for Microsoft to manage, so it will roll out stage-by-stage. If something goes wrong, Microsoft can immediately stop the roll out and eventually reduce the number of affected users.

You don’t have to wait till Microsoft updates automatically for your device. You can do that yourself manually through - Windows Update, Insider’s Program and Media Creation Tool

How to get Windows 10 Anniversary update through Windows Update

This is the easiest and simplest way to manually download Anniversary update. Just follow the below-mentioned steps:

The Anniversary update will be available as Feature update to Windows 10, version 1607. Upon clicking update, it will start downloading.

After installation, just restart your computer. 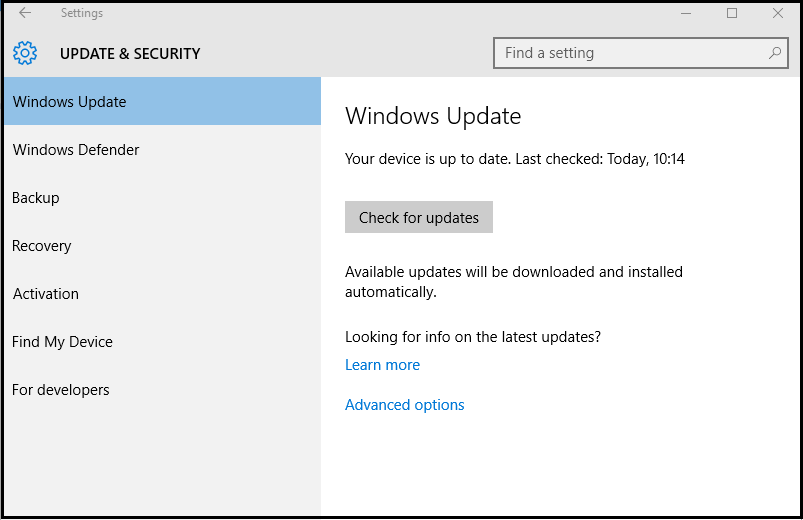 if your device is registered in Windows Insider Program, and you are using Windows 10 version 14393.x or later, then you have to do anything as you will be running on Anniversary update by now.

To perform clean installation of the OS with Anniversary update, you can use Media Creation Tool. Using this method might take some time for you, as Microsoft postpones availability of new version in different procedures to maintain the stability of the servers. Once the Anniversary update is accessible, follow the below mentioned steps to install.

A lot of users have reported problems while trying to install Windows 10 Anniversary update. It may lead to frequent crashes during an update, sometimes even partition disappears. So, it is recommended to take backup of entire PC.

Also, read about how we can help to recover lost or missing files after Windows 10 Anniversary update.