Here is a fact; 70% of businesses have experienced data loss due to accidental deletion, disk or system failure, viruses, fire or some other disaster. [Source: datto]

Read the headline again. Does this confuse you?

Well even if you consider yourself a storage expert or you`re hearing "Storage" , "Hard disks" and "Cloud" for the first time, it doesn`t make sense to risk the data safety despite whatever Google says.

But that`s not what Google is trying to suggest, let`s hear it from Eric Brewer, Google` s infrastructure VP.

Brewer presented a surprising white paper at 2016 USENIX conference on File and Storage Technologies (FAST 2016) on 23rd February. He argued current disks were designed for enterprise service, not for their coming dominant use as a Cloud based storage.

The heart of this idea is the need to optimize collection of disks, rather than a single disk in a server.

It perfectly make sense for a company like Google as they are the massive buyer of hard drives. The volume of storage Google need is tremendous: as this article quotes, for YouTube alone, users upload over 400 hours of video every minute, which at one gigabyte per hour requires more than one petabyte (1M GB) of new storage every day.

And this continues to grow exponentially, with a 10x increase every 5 years, as shown in this Graph. 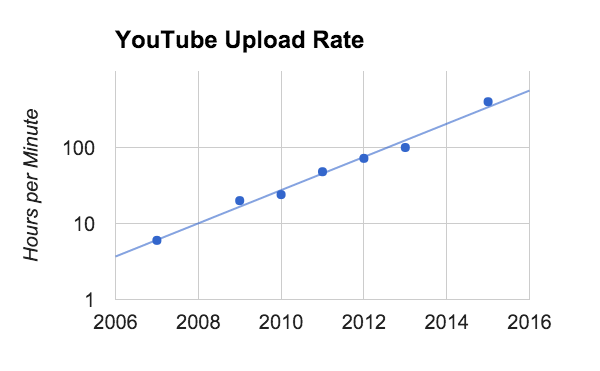 If hard drive manufacturers take the considerations on surface, this shift can have major consequences like disks that are little more likely to lose data. Google further explains,"it`s not like they want to lose data, but rather they can focus on the cost and effort spent trying to avoid data loss".

We got mixed responses on this research.

While we welcome the new move, there are also certain points we would like Google to address.

Especially the concern for the individual users and small enterprises. No one can deny the fact that cloud services has already peaked the pace. But this doesn`t appeal to everyone for mainly two reasons.

First and foremost - privacy concern; while cloud may replace traditional storage but we cannot say it`s entirely safe. There is no guarantee that cloud service provider will not use it to spy on people in future. And recent hacking events on cloud based servers make our concern even stronger.

Second - cost of internet; for home users uploading the vast amount of data into cloud app will take longer hours,  using up a lot of bandwidth and CAP`s ultimately a hefty bill every month. Frankly, you have to be really rich to afford it.

Not to forget the point that people who want storage, like big storage are already constantly monitoring and swapping drives. Since most of the world`s data is stored in monstrous data centers, it only make sense that largest buyer of the hard drives would value capacity and cost over fleeting reliability.

The fact that all hard drive will eventually fail someday makes the argument even more convincing.

Google hasn`t proposed an exact height or any other design parameters. Because they buy enough disks that they could ask any specification they like and can give massive business for manufacturer to sign up, but still Google would prefer universal standard.

If we look on history of hard drives, the shift from spinning hard drives to SSD was to focus on reliability and fast accessibility. Now we are pulling ourselves back again to the era of taller hard drives, ditching expensive SSD over cheaper traditional spinning drives.

What do you think, choosing cost and capacity over reliable hard disks is a good move?