Mac Target disk mode, also known as TDM is a unique boot feature on a Mac computer. This Target mode allows you to transfer data from Mac to Mac with the help of FireWire or Thunderbolt cable at a much faster speed compared to the other data transferring techniques.

Target disk mode makes target Mac (Mac computer with source data) similar to an external hard drive. As a result of which, target Mac can be formatted, logically partitioned and data can also be transferred with ease.

What does Target Disk Mode do?

Before we move on to learn how to boot Mac in target disk mode to transfer data. Let us first understand in what cases Target disk mode Mac can come in handy.

There are two different methods through which you can boot your Target Mac in Target disk mode: 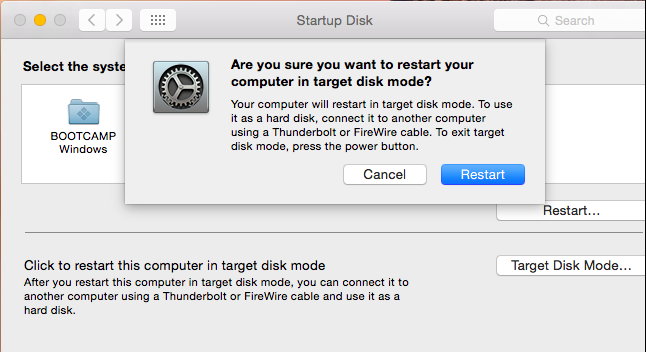 Note: To access your Target Mac Drive wait until it appears on the Host Mac as an external hard drive. And also remember to decrypt your Target drive if it is protected with FileVault.

How to Boot a Mac in Target Disk Mode on the Host Computer?

Now, select Target Mac in a matter of seconds the Host Mac will run as the Target Mac.

After transferring data, if some of your data is missing or not available on Target Mac, then this could be either due to data deletion or data loss. If you have lost all your files completely, then it can be due to file system failure or corruption.

Note: It is suggested to avoid using Mac after you lose or delete data from it, to perform complete data recovery.

After the completion of data transfer, turn off the Target computer and remove the connected cable. Keep in mind you can only boot Mac in Target disk mode to transfer data if the Mac drive is functional.

Damaged or defective Mac drive creates a number of problems during data recovery or transfer process in Target disk mode. You can always rely on Remo Recover Mac, which works securely in recovering files from crashed or corrupted hard drives.