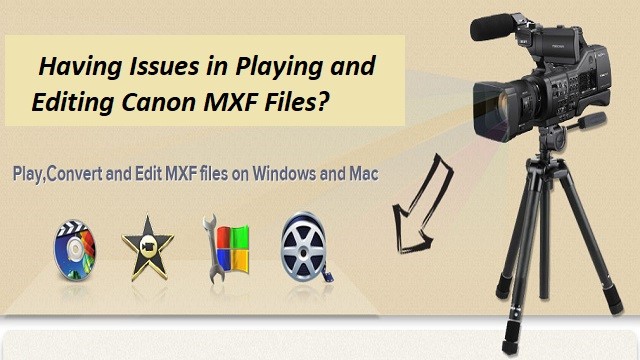 Canon is the first company to make its MXF videos to manage and playback without the use of full-brown NLE (non-linear editing) software. In order to do this, it came up with the software called XF Utility. This utility offers various options for managing and playing back clips recorded with Canon HD camcorders compatible with MXF files.

In order to ensure that their videos have the widest compatibility with existing industry infrastructure and non-linear editing (NLE) systems, Canon adopts MPEG-2 for the Professional Camcorder. But, the MXF codec provides the bandwidth needed to capture the superior resolution and color in spectacular detail which is difficult for common players to afford. So, Canon released a third app-XF Utility to help users to play videos.

But still, Windows and Mac users have reported that they have a problem in playing and editing Canon MXF videos! If you are one among them, don’t worry. Here’s an easy way to fix the issue. And that efficient solution is to get Brorsoft MXF Converter which can transcode Canon MXF files to any popular format to play anywhere, anytime on Windows as well as Mac.

How to Transcode Canon MXF files on Mac and Windows?

Just get the Canon MXF Converter software and follow the steps below to transfer MXF files for smooth playing, editing or uploading.

Install and launch the Canon MXF Converter on your system. Click "Add" or "Add From Folder" button to load the source Canon MXF files. (Or you can drag & drop the MXF files to the software's window list.) If necessary, you can click the button "Merge into one" to combine several videos to one file.

When you are satisfied with all the settings, you can click "Convert" and let the software do the Canon MXF to MP4/MOV/FLV/AVI/MPEG conversion. After the conversion, you can click "Open" button to locate the converted video files. Now you can edit, play or upload your Canon MXF files with no hassle.

However, the way to encode Canon MXF files in Windows and Mac is almost the same. Just make sure you get the right version according to your computer's operating system!

“Like Canon MXF Converter that helps in resolving the issue of playing videos, there are also applications specially designed for repairing damaged video files. If you have any corrupt Canon MOV file and looking to repair, then Remo MOV Repair Tool is the recommended one.”

Not only this, it also lets you adjust video brightness, contrast, saturation and volume control. In general, we can say that you can use this software to convert Canon MXF videos to play anywhere, anytime without hassle in Windows as well as Mac of any latest versions.

“When trying to convert MOV files and if something went wrong, chances are there for video file corruption and the MOV video may won’t play. Under such instances, a professional video repair tool is recommended to fix the issue.”