Info › Troubleshooting › Reasons Why SSD gets Corrupt Easily than HDDs

Reasons Why SSD gets Corrupt Easily than HDDs 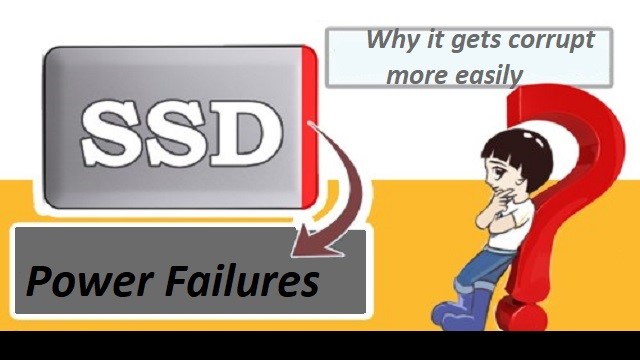 Even though both Solid State Drives, as well as Hard Disk Drives, can get damaged easily in terms of power failures, but in comparison, the SSDs are much more vulnerable for corruption when compared to traditional HDDs. This article explains why this happens!

SSD has earned a lot of fame from both individuals and businesses due to their better performance. Yet, like the traditional hard disk drive (HDD), it’s still prone to corruption for various factors, such as power failures. It’s always suggested to take care of your drives, protecting it against suffering sudden power failures since it can cause serious data loss, like corrupt Outlook data, especially for SSDs.

In spite of the fact that SSDs can look after itself and its data when it’s powered up and it is nonvolatile, abruptly getting from power-on to power-off status still can put all the chips in the SSD into serious dangers. And we can say that, in contrast to HDD, SSD is far more vulnerable to sudden loss of power. The reasons for this are as follows:

#1. The working of SSDs is complex

Solid state drive is able to perform higher read/write intensive activities than the hard disk drive. Also, SSD has many more internal functions which are lacked on an HDD. Actually, in many SSDs, the complexity of the internal data management is similar to that in a traditional RAID system. Therefore, SSD is always much more complex than HDD. Hence, if the power suddenly goes down, more things in SSD will go wrongs than in HDD.

As we all know, unlike the HDD, which is mechanical and magnetic, SSD is totally made up of electronics. There are far more distributed storage elements in an SSD than an HDD. An SSD can contain thousands of flash chips. All of its components are virtually working depending on the power supply.

When it comes to data storage, HDD, undoubtedly, has taken up this industry for much longer time than SSD. Hard drive appears far earlier than solid state drive. Thereby, it refers to that there more researchers and experience about HDD than SSD. Also, the hard drive architecture is nearly settled, not changed much. Thus, the power management system in hard drive has been advanced. But, in contrast, SSD architecture is constantly changing and evolving. At the same time, it means that SSD power management system is also changed continuously and deficient. In a nutshell, experience for SSD is still limited. Repairing the SSD that is subject to power failures is also more difficult than HDD.

Apart from these, there is one more threat associated with the so-called Solid State Drives, i.e., data recovery is more difficult on SSDs than HDDs. More and more users prefer solid state drive (SSD) for both speed and reliability. More specifically, solid state drive uses flash memory to read and write data, so it can be much faster. Plus, as it has no moving components, it can be free of mechanical issues on a hard disk drive (HDD). However, it is also an unquestioned fact that solid state drive can fail as well without any warnings. At that point, the data in it will be corrupted. And you have no choice but to attempt data recovery.

When it comes to recovering data from solid state drive, you can make use of Remo Software that can easily restore data from any type drives, along with SSDs. The tool not only recovers data from failed SSD, but also retrieves data from crashed SSD in simple steps.

Reasons Why SSD gets Corrupt Easily than HDDs was last modified: February 13th, 2018 by John Harris