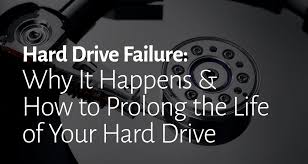 Every user has loads of photos, documents, video files, Office files, and other data stored on hard drive. And since most of the people today own laptops, and external hard drives, which get dragged around a bit, a hard drive’s lifespan ranges probably between 3 to 5 years, depending on usage, and other factors.

In most cases, the hard drive fails slowly over time, which gives you a hint and you need to copy your data and replace the storage drive before it could eventually crash. If you don’t know how long your hard drive will keep going, then here are a few warnings signs of a hard drive crash:

A computer’s slow performance or freezing could be caused due to various reasons. However, whatever the problem might be behind these symptoms, it is better to immediately back up your data. Slow performance, an occurrence of the blue screen of death, and frequent freezes indicates a near hard drive crash. So better backup data.

If you can hear strange noises from your computer, then it’s already too late. Grinding, or screeching noises indicate that the spindle motor or bearings are failing. A repetitive clicking sound also indicates that a hard drive crash is around the corner.

Bad sectors are hard drive areas which do not maintain data integrity. They are hard to identify, mostly when a large proportion of the disk is currently in use. So if you run into bad sectors, then it really is a bad sign, and you need to backup your data at the earliest.

Note: If you want to recover data from external hard drive that is corrupted, turned RAW, has become inaccessible, then you can use this Hard Drive Recovery tool which will efficiently restore your data.

If your files fail to open, suddenly disappear, or get corrupted even though they were saved without any errors, then it is worrying. While this could happen due to various reasons, it mainly indicates a gradual hard drive failure.

Modern hard drives have the S.M.A.R.T. monitoring system built into computer’s BIOS. On a basic level, it can only tell whether the drive is OK or not depending on the conclusion of the internal S.M.A.R.T. diagnostics.

So if you have come to these symptoms, and the S.M.A.R.T. test doesn’t give you a good result, then it means the hard drive crash can happen in the near future. When you spot a hard disk crash, the first thing you should do is to backup data to a secondary storage device. In case, you have lost data after a hard drive crash, then you can make use of Disk Recovery tool to restore data from a partitioned hard drive. Nevertheless, you don’t have to rely on warnings to see if the drive is failing, you can regularly backup data.